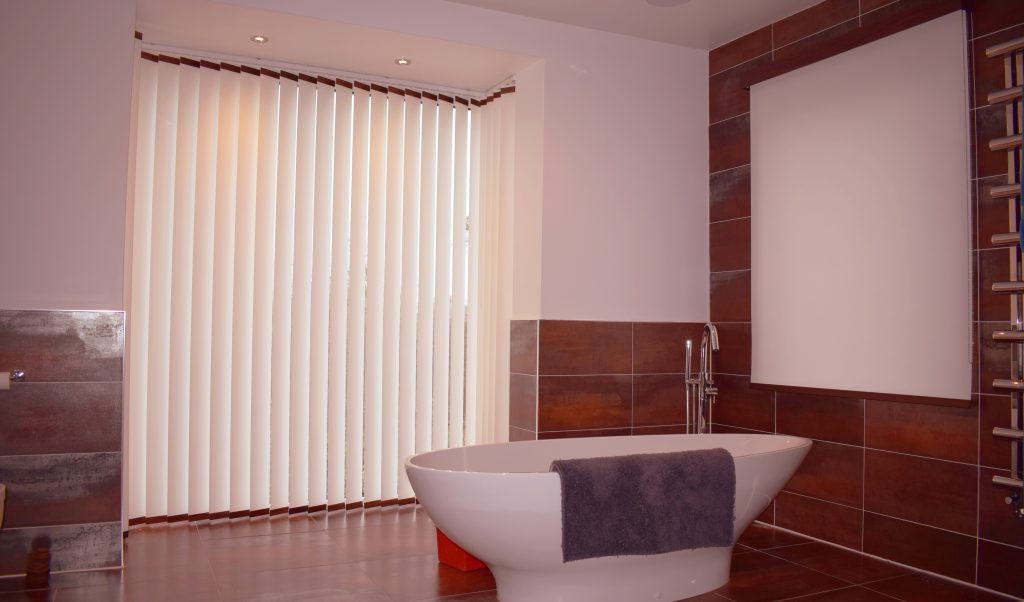 Well, we may sell most Japanese Blinds around London but they are becoming a big part of out blinds portfolio. As you probably know, Vertical Blinds originally were 5” wide and made of cotton/polyester mixes, then fibreglass (remember the fibreglass curtains?). They were the most popular around London (why do all fashions start in London?) but then their popularity spread North and began to replace Venetian Blinds- metal and PVC louvres were introduced rather like on Venetian Blinds, and the bottom weights acquired chains front and back instead of a single chain through the Vertical Blind louvre weight. Soon, louvres were available in other widths- 89mm and 50mm. By the 1980s Vertical Blinds were taking off and people were buying them for small windows as well as big patio doors! After the millenium, some Vertical Blinds firms were adding woodtrims – weights weren’t needed any more and many customers felt here was a blind that no longer looked like an ‘office blind’- Japanese Vertical Blinds were here! The louvre width was often wider than the original sizes as people realised louvres rarely needed to rotate completely around. After our Japanese Shoji Blinds were shown on Channel 4 on TV we had over 10,000 website ‘hits’ and we realised they were the new ‘fashion’!
Oh, and most of those ‘hits’ were from London- but that was no surprise after our Vertical Blind experience in the 1980s! Japanese Vertical Blinds to co-ordinate were the natural addition too; both used Obeche timber which had been air-dried in Spain. Obeche is almost the lightest weight wood on the planet, with a beautiful grain. So if you want the most versatile type of blind you can possibly have, choose Japanese Vertical Blinds! Call us on 0115 9674477
By the way, our name ‘Highbury Design’ doesn’t actually originate from London but from the Highbury area of Nottingham- although we welcome our London Clients!
Japanese Vertical Blinds. Vertical Blinds with a difference!